The Las Vegas Metropolitan Police Department would rather forget its first officer involved shooting of 2011. Actually, Metro tried its best to make sure the public never found out about it at all. Banking on the fact the shooting resulted in no fatalities or injuries, Metro did not release details on the incident, for nearly three weeks, rather than the department’s normal 48-hour policy.

Just because no one was injured didn’t make the events of January 12th, 2011 not worth examining. The fact no one died, actually makes the night Leonard Greer narrowly escaped being Metro’s first victim of the year worth a closer look. Just because Sgt. Darrin Densley didn’t kill Greer, doesn’t excuse his behavior. On the contrary, how Metro handled this officer’s mistake speaks volumes about the mindset present within the department. 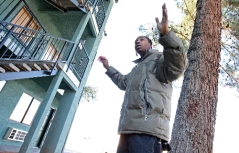 Greer was simply paying his rent when approached by the officer who eventually shot at him.

Greer said he first noticed Densely as one of four Metro officers gathered in the courtyard of Greers apartment complex on Swenson. Greer said he paid the officers no attention. After all, he wasn’t breaking any laws, just walking to his car with his girlfriend, Edna Williams, and her two cousins. The four were all in Greer’s Oldsmobile Bravada and he had just put his key in the ignition when he saw Densley standing near the windshield with a gun pointed at him. The officer ordered Greer out of his vehicle. Greer refused.

“I said, ‘No, I’d done nothing wrong,’ and that I lived there,” he told reporters. By law, officers may only demand citizens comply with such demands if certain criteria had been met. This criteria, set forth in Terry v. Ohio, mandates officers must have a reasonable, articulable suspicion that someone is engaged in or about to engage in a crime in order to detain a person. Densley’s next request cast serious doubt as to whether or not he had such suspicion. The officer demanded some proof that Greer was a resident of the complex. Since no one had accused Greer of trespassing, this request doesn’t make any sense under the Terry decision.

That’s when Densley fired, Greer said. The bullet fired from Densley’s handgun should have pierced the driver’s side window of his car and ended up in Greer’s body. Instead it glanced off the window and fell down into the driver’s door of Greer’s sport utility vehicle.

At this point Greer had not acted in an aggressive manner and all the occupants of the vehicle had their hands in the air, as neighbor Paul DePrizio witnessed. While Greer was owed a major apology from the officer, what happened after he was almost killed by Densley’s reckless, unconstitutional behavior is even more vile and should be remembered whenever Metro offers up their unsubstantiated version of events surrounding future shootings.

Rather than bite the bullet and accept blame for Sgt. Densley’s actions, Metro converged down on Greer with a fury. Greer, who had broken no laws, had already been illegally detained at gunpoint, and nearly shot, continued to be treated as a suspect. Metro thoroughly searched his vehicle, and when that produced nothing to justify an officer opening fire on him, they conducted a search of his home as well. That’s right, after illegally detaining a law-abiding citizen, demanding he provide proof of his residence, and then almost killing him a point blanks gun shot, Metro decided to search his home, and why. They were desperate to find a gun, drugs, stolen property –anything to justify the use of deadly force against an unarmed man whose hands were in plain view..

One can only imagine what Metro’s story would be had Greer been fatally shot and a firearm was found locked up in his home. Would it have found its way into the vehicle? We would  hope not, but Metro’s actions here are more than suspicious and raise significant doubt.

And after being unlawfully detained, shot at, and his Fourth Amendment rights violated, did Greer receive an apology? Nope, he received a misdemeanor citation for obstructing a police officer. That charge was quickly dismissed by the courts.

Sgt. Darrin Densely, a 22-year police veteran, was placed in paid administrative leave following the shooting. The Use of Force Board found he was justified in firing at the unarmed Greer in the course of a never-explained “police activity.”  According to Transparent Nevada, he was paid $177,002.20 in total compensation in 2012.

What Do You Think? Cancel reply