If You’re a Stripper,

The former Nevada Highway Patrol sergeant who caused a fatal three-vehicle accident in 2008 entered into a negotiated plea agreement that will limit his potential prison term to no more than 6 years. Edward Lattin, a 22-year NHP veteran who, as a sergeant supervised a team that investigates fatal crashes, recently entered a guilty plea to a single count of felony reckless driving causing death. 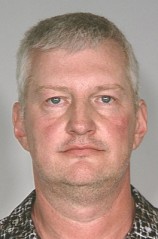 The 51-year-old Lattin, who police say had more marijuana in his system than state law permits while driving, was originally indicted under the same controversial Nevada law under which Jessica Williams was convicted following her 2000 accident that left six teenagers dead. The law’s controversy stemmed, in large part, due to the legal issues that allowed the jury to acquit Williams of driving under the influence of a controlled substance while still convicting her of driving with that same prohibited substance in her blood. Although the jurors determined Williams was not impaired, they also found that Williams had more than 2 nanograms of marijuana per millilitre in her blood. Williams’s appeal was upheld by the state Supreme Court which ruled the law did not require the driver to be impaired.

That is what makes Lattin’s plea all the more troubling. Lattin was indicted under NRS 484C.430 based on the testimony by authorities that blood drawn from the off-duty trooper immediately after the fatal crash tested positive for marijuana at a level of 5.6 nanograms per millilitre. Lattin faced up to 20 years in prison if convicted. Section 2 of NRS 484C.430 contains a unique provision.

“A prosecuting attorney shall not dismiss a charge of violating the provisions of subsection 1 in exchange for a plea of guilty…to a lesser charge or for any other reason unless the attorney knows or it is obvious that the charge is not supported by probable cause or cannot be proved at the time of trial.” 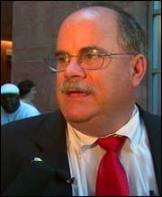 After announcing the plea agreement in open court, prosecutor Bruce Nelson said the Clark County District Attorney’s office negotiated the case with Lattin because the blood test alone could not prove the former Trooper was impaired at the time of the crash, which seemed a rather odd assertion. Considering Nelson was the prosecutor who had previously convicted Williams under the same statute without proving she was impaired, this can’t be dismissed as simply gaff by prosecutors. It’s seems an obvious case of special treatment.

This plea agreement, which the statute clearly does not allow, will most likely allow Lattin to spend a mere fraction of the time Williams received for each one of her counts despite the facts of the cases being nearly identical. This comes as no surprise considering how Lattin’s case was dealt with in an entirely different manner than Williams from the very beginning. 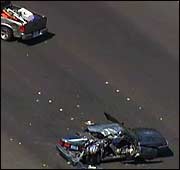 Scene from the 2008 Crash caused by Lattin

Williams was placed in custody immediately following her accident and remained at the CCDC through her trial, unable to raise a bond of nearly $1,000,000 per victim. Lattin, on the other hand, was not arrested for nearly a month after his accident, and spent only a few days in jail after a judge set his bond at only $50,000 or about 20 times less than bond was set for the similar counts against Williams after his attorneys argued he deserved consideration because of his job with the NHP. This allowed Lattin’s defense team to request continuance after continuance while the former trooper remained free, and perhaps that frustration is what lead Nelson to ignore the law and offer Lattin what essentially is a slap on the wrist.

Lattin was sentenced to a 14 to  48 month prison sentence.