The Killing of Trevon Cole by

Today’s “Raid of The Day“

Radley Balko, senior writer and investigative reporter for the Huffington Post, has extensively covered the erosion of our civil liberties at the hands of an increasingly oppressive criminal justice system. He is currently wrapping up work on his new book “Rise of the Warrior Cop: The Militarization of America’s Police Forces.”

As a prelude to the book’s publication, Balko has been featuring incidents of deadly police aggression he researched for the forthcoming book. Today, Balko took a look at the 2010 killing of Trevon Cole, by Metro’s most famous perjurer, Bryan Yant. 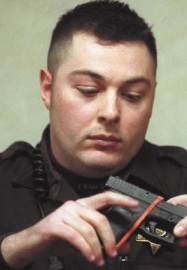 Due out in July, but currently available for pre-order, Rise of the Warrior Cop, will take a look at how the implementation of SWAT teams by both the Philadelphia and Los Angeles police departments marked the beginning of a deadly movement by America’s law enforcement away from the friendly public servants of the 1950s to the cops of today who have increasingly come to resemble ground troops who no longer see the American home as the sanctuary our forefathers envisioned, and no longer see themselves in partnership with the community but been conditioned to see the citizens they serve as nothing more than the enemy. The type of police force we saw going door-to-door in Boston in  full combat gear searching homes without a warrant.

CopBlock Now Has an Online Presence For Nevada!

There’s now another voice for those in Nevada who are tired of the lack of accountability with law enforcement, thanks to longtime Vegas activist Kelly Patterson. Patterson will be the site runner for Nevada CopBlock. Patterson says his reasons for taking the helm of Nevada CopBlock stem from a recent Metro shooting that personally affected him.

It was the recent murder of Stanley L. Gibson, whom I knew from high school, by Jesus Arevalo, a Metro cop with a long history of complaints, and LVMPD’s refusal to cooperate with his widow that fast forwarded Nevada Cop Block from a future project that I had been recruiting additional support for into something that I was going to get up and running ASAP.

Patterson has been active with CopBlock for a few years. He can be seen helping raise awareness on Las Vegas Blvd. back in 2010. Patterson  helped hand out about 400 fliers as part of the week the guys from www.libertyontour.com spent a  week in Vegas.

A Tale of Disrespect for Human Life &

Contempt for the Constitution.

Business as Usual for the LVMPD

Clark County Sheriff Doug Gillespie and his Las Vegas Metropolitan Police Department would rather forget about 2011’s first officer involved shooting. In fact, Metro tried its best to make sure the public never found out about it at all. While hoping that a shooting not resulting in fatalities or injuries would go unnoticed by the public and the media,  Metro simply ignored long-standing policy and didn’t release details on the incident at all. For nearly three weeks, it seemed as if their plan might work. 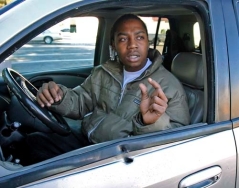 No matter how hard they tried,  they couldn’t keep the public from finding out that to Sgt. Darrin Densley, being black was synonymous with being a criminal. Just because no one was injured in the shooting doesn’t mean Densley’s racist, aggressive and unconstitutional actions aren’t worth examining. Actually it is because no one died, that makes the evening of January 12, 2011 worth a closer look. How Metro handled this officer’s mistake speaks volumes about the mindset present within the department.

Greer said he first noticed Densely as one of four Metro officers gathered in the courtyard of Greers apartment complex on Swenson. Greer said he paid the officers no attention. After all, he wasn’t breaking any laws, just walking to his car with his girlfriend, Edna Williams, and her two cousins. The four were all in Greer’s Oldsmobile Bravada and he had just put his key in the ignition when he saw Densley standing near the windshield with a gun pointed at him. The officer ordered Greer out of his vehicle. Greer refused.

“I said, ‘No, I’d done nothing wrong,’ and that I lived there,” he told reporters. By law, officers may only demand citizens comply with such demands if certain criteria had been met. This criteria, set forth in Terry v. Ohio, mandates officers must have a reasonable, articulable suspicion that someone is engaged in or about to engage in a crime in order to detain a person. Densley’s next request cast serious doubt as to whether or not he had such suspicion. The officer demanded some proof that Greer was a resident of the complex. Since no one had accused Greer of trespassing, this request doesn’t make any sense under the Terry decision.

Greer was simply paying his rent when approached the officer who eventually shot at him.

That’s when Densley fired, Greer said. The bullet fired from Densley’s handgun should have pierced the driver’s side window of his car and ended up in Greer’s body. Instead it glanced off the window and fell down into the driver’s door of Greer’s sport utility vehicle.

At this point Greer had not acted in an aggressive manner and all the occupants of the vehicle had their hands in the air, as neighbor Paul DePrizio witnessed. While Greer was owed a major apology from the officer, what happened after he was almost killed by Densley’s reckless, unconstitutional behavior is even more vile and should be remembered whenever Metro offers up their unsubstantiated version of events surrounding future shootings.

Rather than bite the bullet and accept blame for Sgt. Densley’s actions, Metro converged down on Greer with a fury. Greer, who had broken no laws, had already been illegally detained at gunpoint and nearly shot was immediately treated, not as the victim he was, but as a suspect. Metro thoroughly searched his vehicle, and when that produced nothing to justify an officer opening fire on him, they conducted a search of his home as well. That’s right, after illegally detaining a law-abiding citizen, demanding he provide proof of his residence, and then almost killing him, Metro felt the most appropriate course of action wasn’t to apologize profusely, it was to search his home. Why? Well they were desperate to find something they could pin on Greer. Finding a gun would have been optimal, but they would have settled for any evidence of a crime.

One can only imagine what Metro’s story would have become had Greer been fatally shot while unarmed if they had found a firearm locked safely away in his home. Would it have found its way into the vehicle? We would  hope not, but Metro’s actions here are more than suspicious and raise significant doubt.

Searches of Greer’s vehicle and home turned up nothing, so you would think that  after being unlawfully detained, shot at, and his Fourth Amendment rights violated,  Greer would have received an apology? Not quite. Instead, he received a misdemeanor citation for obstructing a police officer. That charge was quickly dismissed by the courts.

Sgt. Darrin Densely, a 22-year police veteran, was placed in paid administrative leave following the shooting. The Use of Force Board found him justified in firing at the unarmed Greer in the course of a never-explained “police activity,”  and he returned to active duty.  According to Transparent Nevada, taxpayers paid Densely $177,002.20 in total compensation in 2012.

Since 2008, Metro paid settlements in

The Las Vegas Metropolitan Police Department has cost taxpayers an average of $1.1 million dollars a year in settlements over the past four years, according to a recent report by KSNV.

Most frightening is that Channel 3 is reporting that Metro has already paid nearly $2 million dollars during the first four months of this year alone.

What KSNV didn’t tell us is how many of the officers responsible for these payouts are still employed by the department. The majority either still wear a badge or have retired with full benefits.  Only a very few of these costly employees received discipline of any kind. Many are still on the force, and are part of this site’s Officer Hall of Shame.

The bulk of this year’s $1.9 million dollars went to the family of Trevon Cole. In January,  Metro paid out $1.7 million (the department’s single largest settlement ever) to the family of the unarmed man gunned down in his bathroom by narcotics detective Bryan Yant during a botched drug raid. Yant is still employed with Metro and was paid $131,051.08 in total compensation in 2011.

In 2011, German police killed 6 people throughout the entire country.

Yet in 2011, the Las Vegas Metropolitan Police Dept. killed 12 people in Clark County.

End the War on Drugs