Wolfson’s decision not to Charge Seekatz

Not as bad as it seems, as long as

Our new District Attorney Steve Wolfson made a lot of promises when he was asking the Clark County Commissioners to serve the remainder of David Roger’s term as District Attorney. Among them was a vow to make sure police officers who committed criminal acts were held accountable.

While at first glance his decision not to charge Henderson Police Officer Brett Seekatz seems to clearly violate that promise, but we decided to take the weekend and give Wolfson’s five-page explanation a little thought.

First off there’s no way around the seeing Wolfson’s decision to release his opinion late Friday evening as a way to bury it over the weekend, and for that cowardice we are not pleased. However, the decision as a whole was incredibly detailed and tried to explain the DA’s reasoning in clear terms, rooted in Nevada Law. That is something his predecessor, police union attorney  David Roger, never bothered to do. While Roger acted as if he answered to no one, especially the taxpayers, Wolfson  at least acknowledges who butters his bread.

Now despite the fact that we felt strongly that Seekatz  deliberate and unnecessary kicking of the diabetic Motorist in the head five times was a criminal act, we can understand how Wolfson was able to see that it was not. What is impressive is that strength of conviction Wolfson showed in his decision. Public sentiment was that he should charge Seekatz, especially after Seekatz’s past misconduct issues were uncovered. 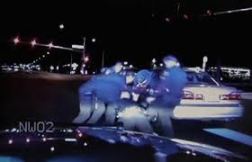 Seekatz (right) delivers on of five kicks to Motorist

The easiest thing for Wolfson to do was to hand the case over to an ADA and have him prosecute.  But Wolfson didn’t respond to mob rule. He made a difficult choice  and stuck by it. And in the end he made every attempt to explain to the public why he made his choice. One of  those issues that demands the most respect is his willingness to take the victim’s, Adam Greene’s, wishes into account. While he never specifically asked for Wolfson to drop the cases, he did express a desire just to put the two-year-old incident behind him.

Wolfson has made no indication he wants to stay in office beyond the term he was appointed. But has long as Wolfson continues to make tough decisions that are rooted in law and has the respect to explain those decisions to the taxpayers, we could do a lot worse. In fact David Roger is proof we have.

However, if Wolfson continues to give cops the deference to commit crimes opinions will change. The Seekatz decision has been made, but Wolfson has remained silent on his intentions to pursue charges against Brian Yant for perjury in the William Sigler case, or against Derek Colling for the false arrest and beating of Mitchel Crooks, or against Henderson Police Department officer Wavie Reed for the off-duty killing of a 58-year-old Henderson man, or the most egregious case ignored by David Roger, the 2010 murder of Ruslan Zhgenti by off-duty Henderson cop, Edward Little.

What Do You Think? Cancel reply